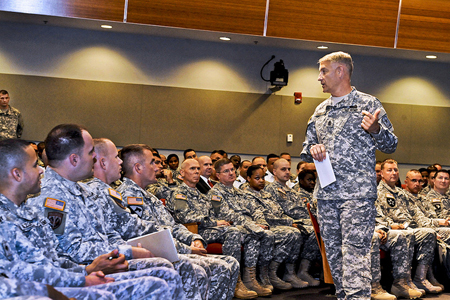 The freedom of speech is generally protected from government restriction, with the exception of limited types of speech. Such exception includes defamation and incitements to violence. There are other examples, such as pornography or copyright violations, which courts have ruled to be legitimately subject to some degree of limitation.

The First Amendment not only protects verbal speech, but also protects nonverbal speech, characterized as expressive conduct or symbolic speech. It even includes abstaining from reciting the Pledge of Allegiance, and burning the American flag to convey a political message.

The Department of the Army and OAA are working to protect freedom of speech for all Service Members, employees and the public to the greatest extent possible, while achieving mission requirements.

The "Establishment Clause," stating that "Congress shall make no law respecting an establishment of religion," is generally read to prohibit the Federal government from establishing a national church ("religion") or excessively involving itself in religion, particularly to the benefit of one religion over another. However, the government may enter into the religious domain to make accommodations in order to achieve the purposes of the Free Exercise Clause.

The "Free Exercise Clause" states that Congress cannot "prohibit the free exercise" of religion. This guarantees individuals the right to follow their chosen religion. Not all religious practices, however, are protected – particularly those which may violate civil or criminal laws. For example, if a religion that permitted indentured servitude, that particular practice of that religion would not be allowed. The same would apply to ritual animal sacrifice, that particular practice would not be allowed. Although the government cannot interfere with religious beliefs, it may enforce the law when it comes to practices.

In the U.S. military, Service Members are afforded the same rights to religious freedom as are American civilians. However, they willingly surrender on a temporary basis certain free exercise rights when it impinges on military discipline and the successful completion of a military objective. This guarantee of religious freedom is codified in Title 10, United States Code (USC), sections 3073, 3547, 3581, 5142, and 8067, which includes the law requiring chaplains to conduct religious services for personnel of their assigned command. Free exercise of religion for military personnel is further detailed in Department of Defense Directive (DODD) 1300.17 and Army Regulation (AR) 600-20, which describe the commander’s responsibility to provide for religious accommodation.

Congress recognizes the necessity of the Chaplain Corps in striking a balance between the two clauses of the First Amendment. In the pluralistic setting of the military, the Chaplain Corps provides opportunities for religious support for individuals from all religious backgrounds. Chaplains cooperate with each other, without compromising their faith tradition or ecclesiastical endorsement requirements, to provide comprehensive religious support within the unique military environment.